BREAKING AND WASH UP OF SOLITARY WAVES ON A COMPOSITE BEACH 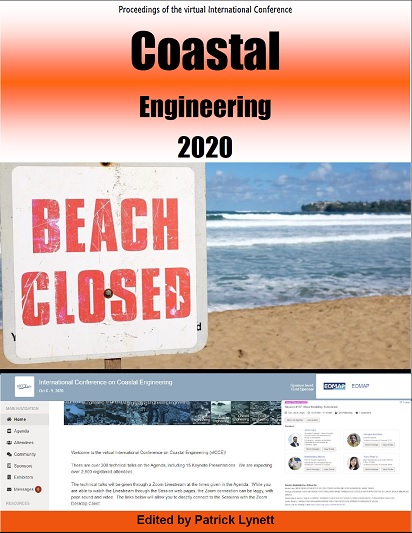 Hazardous events, such as landslides, rock slides, rock falls or avalanches often generate extreme, impulsive waves when entering water bodies (Fuchs & Hager, 2015). These waves are approximated by solitary waves and researchers investigate their damage potential when inundating built environment. Deepening the understanding of solitary waves running up a uniform beach slope and propagating over a subsequent horizontal plane can help to reduce and mitigate damage and the number of casualties caused by such a hazardous event. So far, few authors addressed this specific setting near-shore (Fuchs & Hager, 2015; Zelt & Raichlen, 1991). In this study, large scale solitary waves propagate about 200 m in in the Large-Wave Flume (GWK, 307 m 5 m 7 m) at the Coastal Research Center in Hannover, Germany then they run up a beach slope and subsequently break, generating a bore which advances onto a subsequent, initially dry, horizontal surface. Unlike previous studies, the generated solitary waves broke close to the edge between the beach slope and the horizontal plane section. The overall aim of this study is to investigate the characteristics of the broken waves' dynamics. In addition, their surge profile and front celerity are compared to those of the non-breaking solitary waves. Subsequently, the differences between the velocity regimes along the bore propagation path are presented and linked to the fundamental physical processes behind.